In addition, Sennheiser played a pivotal role in the production of the 60th Annual Grammy Awards one week prior to the big game

Despite record-setting freezing temperatures, professional football fans had a lot to cheer about during Super Bowl LII as the defending champions New England Patriots facing off against the Philadelphia Eagles, a game that drew over 100 million viewers and 67,612 inside the U.S. Bank Stadium.

Setting the tone for the evening with “The Star-Spangled Banner” was P!NK, who sang through a Sennheiser Digital 6000 wireless microphone system. 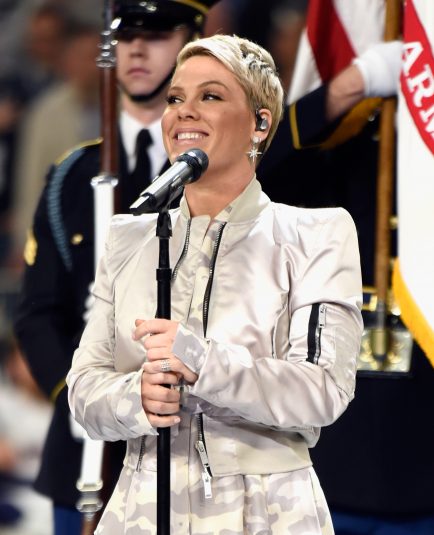 “For an artist whose vocal performance is so well renowned, it is important for us to have the ultimate equipment specification both on tour and during the Super Bowl,” says Jon Lewis, Monitor Engineer for P!NK.

“We have a very strong relationship with Sennheiser, and the Digital 6000 enables us to attain the best digital audio quality as well as dependable RF.”

The P!NK team has been using the Digital 6000 system over the last several months while on touring, including appearances on Saturday Night Live, the Grammy Awards, and the Video Music Awards, among others.

During her performance of “The Star-Spangled Banner” at this year’s Super Bowl, P!NK sang through a Sennheiser SKM 6000 handheld transmitter, coupled with an MD 9235 capsule. “We have always been really happy with her voice on the MD 5235 capsule, so when we moved over to the Digital 6000 series, it was a very natural progression,” Lewis says.

For Lewis, the Sennheiser Digital 6000 series succeeds on a number of fronts — most importantly on the stage.

“I first used the Digital 6000 on a recommendation from Dave [Bracey], who had used it with Adele. Since then, I’ve just been blown away with the distance range and quality. It has proven to work equally well on both in-ears and through wedges, and the microphone itself can handle being in environments with super-high noise levels like the Super Bowl,” Lewis said.

“We are honored that our microphones and wireless systems are continually used by singers who are at the top of their game. With the Digital 6000 Series wireless system, we have opened yet another chapter of innovation, audio quality and reliability,” Byron Gaither, Artists Relations Manager, Professional Audio at Sennheiser says.

As the most-watched annual sporting event in the United States, this year’s Super Bowl did not disappoint in delivering a spectacular outcome, with the Philadelphia Eagles snatching up their first ever Super Bowl title, with fans around the world will surely remember the captivating performance by P!NK that set the evening’s wheels in motion.

Sennheiser Delivers Winning Wireless at 2018 Grammy Awards
Just a week prior to the Super Bowl, Sennheiser also played a pivotal roll in the at the 60th Annual Grammy Awards, with 20 channels of its digital wireless technology and four channels of its analog wireless technology in use by several of the biggest artists in the industry. Among the night’s Sennheiser users was Album of the Year and Record of the Year winner Bruno Mars. All of the Sennheiser-utilizing artists’ unfettered performances stirred a packed house at New York City’s Madison Square Garden as well as the millions watching live on television across the country and around the world.

Sennheiser Digital 9000 user Bruno Mars emerged as the most decorated artist of the 60th Annual Grammy Awards. Cardi B joined him for a performance of the remix of “Finesse,” with Mars using an SKM 9000 and MD 9235 transmitter and capsule combination for the retro-tinged hit. He would go on receive several of the night’s highest honors, including Album of the Year and Record of the year for 24K Magic, as well as Song of the Year for “That’s What I Like.”

Several Sennheiser users who did not perform were also honored with awards during the evening. Among these were Ed Sheeran, a Digital 9000 and Digital 6000 user who received two Grammy Awards for Best Pop Solo Vocal Performance and Best Pop Vocal Album. The Foo Fighters received a Best Rock Song award; singer Dave Grohl uses an MD 431-II microphone. The Weeknd, a 3000/5000 series wireless user, received an award for Best Urban Contemporary Album.

“It is always a thrill to see Sennheiser microphones put to use by the industry’s leading artists on the year’s biggest stage,” says Byron Gaither, Artists Relations Manager, Sennheiser. “There’s no better testament to the quality and superior design of our products than having them used by musicians and performers working at the highest possible level.”