With 18 cameras and four network feeds, the teams handled a total of 22 sources

When Bob Becker, EVP, Van Wagner Sports and Entertainment (VWSE), was working his first Super Bowl, XXIX in 1995, on the in-venue video show, it was easy to keep track of the production team: it had only two people. For today’s big game, a team of 45 has been working hard for months, and many have been onsite for more than two weeks, working closely with the AMB Sports + Entertainment team to ensure that fans today get a great experience.

“We are going to take the Halo board,” he adds, “and use it as a canvas to create dynamic content and game presentation for the fans that has never been done before.” 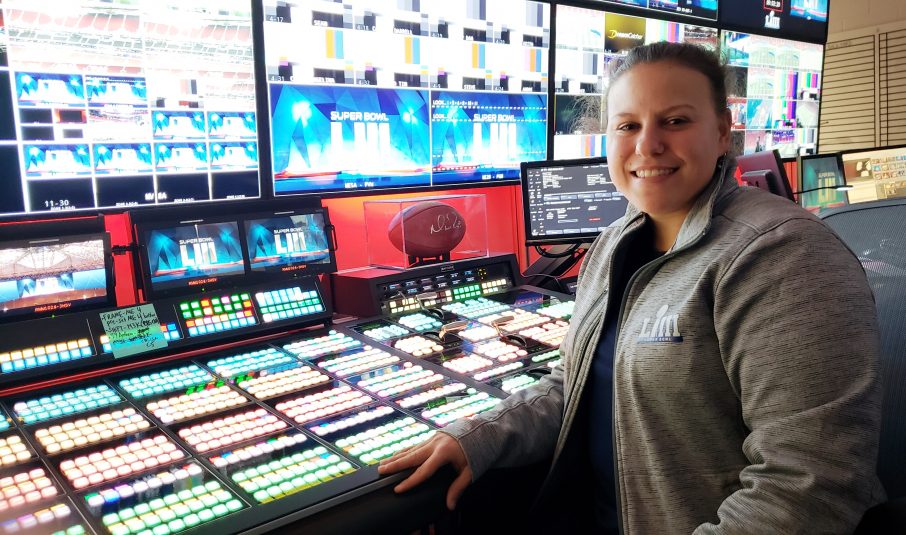 Julia Chongarlides will serve as TD at Super Bowl LIII, a role she also handles for Atlanta Falcons games.

Topping the list will be four 360-degree videos that have been specially created for the Halo board, the 360-degree circular videoboard hanging in the middle of the stadium.

“They were edited for the entire circumference of the board with pictures popping all over the place,” he says. “It is very dynamic and a complete sensory experience.”

The VWSE team works closely with the in-house video department, which is experienced with the control rooms, how to get the most out of the boards, and more.

“We look to the [venue production] teams for general direction on how to use the board; we don’t want to reinvent the wheel,” Becker says. “One of the advantages we have is, we don’t have a lot of sponsors and don’t have to window out sections of the board for sponsors. So we can really be creative.”

He adds that, for the Super Bowl, three simultaneous shows are being produced by three teams: the game presentation, the up-to-the-second stats for the game, and a show for the ribbon board that complements the other two shows.

The VWSE team has worked the board before, for the 2018 College Football Championship Game between the University of Alabama and the University of Georgia. One of the challenges then was that the scoreboard-control room had one only Ross Xpression Tessera system, which is used to deliver content to the Halo. With only one system, the team could not upload content and create it at the same time.

“But now the stadium has a second Tessera system,” Becker notes, “so we can load content onto one system while creating content on the other.”

The group of 45 includes additional editors, producers, and also a team from Ross Video that helps out with augmented reality and Ross Xpression graphics.

“It takes more and more people to keep the show to the level of expectations,” says Becker. “People said last year’s show was one of the best game presentations.”

Key to the success is the merging of the VWSE team with the local venue team, and Becker has a bit of an advantage this time around: he previously worked with Pete Soto, senior director of game presentation, AMB Sports + Entertainment Group, in Miami for the Florida Marlins.

“I’m proud to be able to share this with Pete,” says Becker. “He has put together a great team here. The support has been unprecedented.” 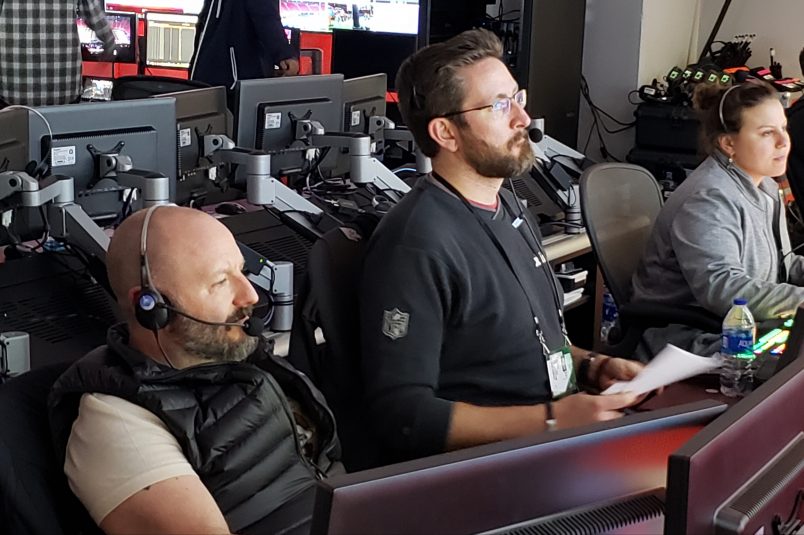 She serves as TD for the Atlanta Falcons games and also spent half a season as TD for Atlanta United. Midway through the MLS season, she became director of the United games and also directed the MLS Cup for 74,000 fans. She will once again get to tell the story to a packed house, and she, Kehn, and Scott will have 18 cameras and four network feeds to work with, for a total of 22 sources.

Chongarlides has a lot of experience creating videos for the Halo board. She says the team works with 11 looks, including a 180-degree canvas that measures 10,000 pixels across and 1,080 pixels high. She has learned to shoot really wide, even when the video is running on a quarter of the screen, which measures 5,042 x 1,080.

“When we produced the ‘We Ready’ video for Atlanta United, we shot closeups of their faces,” she explains, “but, when you scale, it gets really close, so you just need to shoot very wide.”

The extra help also extends to vendor support. Gaines Johnson, field applications engineer, DreamCatcher, Evertz, has been onsite to ensure that the DreamCatcher replay systems are running at full speed.

“We have seven playout systems here,” he says. “We flipped the 4K recording to HD, so there are 21 HD records and four 3X-slo-mo records. Replay operations are broken down with one replay operator in charge of first-look replays, another handling packages, another looking at high-frame-rate records, another at CBS output, and two others building AFC and NFC packages.”