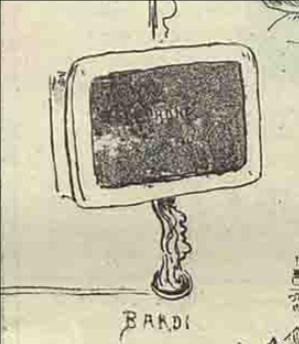 Question: What is shown in the drawing at the left?

Here’s more information to help you figure it out: It’s a small portion, the lower left corner, of a larger drawing, and there’s something very similar at the lower right corner as well. The larger drawing appeared as a two-page spread on pages 76 and 77 of a Portuguese periodical called O Antonio Maria. The illustration (and the article that followed it) is about an event involving media technology and popular culture.

Do you think you have a good handle on the object being depicted in the drawing? The date of the periodical in which it appeared is 6 de Março de 1884, or, in English, March 6, 1884, more than 126 years ago.

Today is the 125th anniversary of pay cable. The event shown in the drawing, about a year-and-a-half earlier, helped make pay cable possible. And pay cable helped create the news and entertainment media as we know them. But I’m getting ahead of the story. 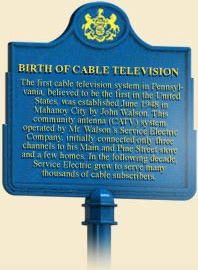 Here’s a historical marker erected by the Commonwealth of Pennsylvania at 1501 E. Centre Street in Mahanoy City. This is what the fine print says: “The first cable television system in Pennsylvania, believed to be the first in the United States, was established June 1948 in Mahanoy City by John Walson. This community antenna (CATV) system, operated by Mr. Walson’s Service Electric Company, initially connected only three channels to his Main and Pine Street store and a few homes. In the following decade, Service Electric grew to serve many thousands of cable subscribers.” If you’d like even more information, here’s a link to the marker’s web site: http://explorepahistory.com/hmarker.php?markerId=1024

I have no desire to set off another war between the states, so let me just say that, whatever the origins of community-antenna television in the United States, I believe they occurred at around that time. But the U.S. is not the whole world.

Regularly scheduled all-electronic television broadcasts began in Britain before they did in the U.S., and so did subscription television retransmission systems. At left is a portion of a drawing that appeared in the July 1937 issue of Television and Short-Wave World in an article titled “Television Relays for Modern Flats.”

In fact, they provided cable-radio service for years before they got involved in cable TV. So did Rediffusion. 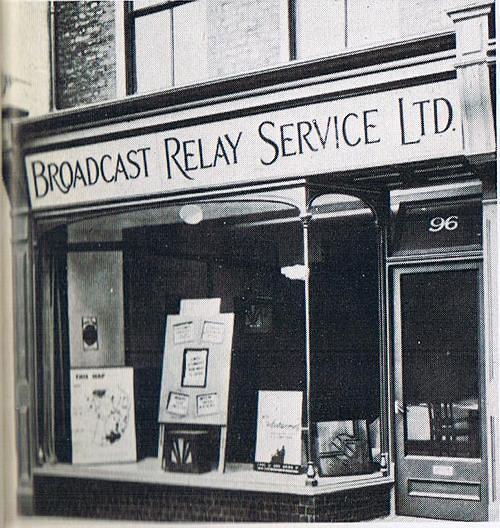 Rediffusion was created by Broadcast Relay Service Ltd., established in 1928 to provide radio programming to subscribers. Did they relay radio signals over coaxial cables?

As might be suggested by this 1932 photo of one of their storefronts, copyright by RediffusionInfo.com and used here with permission, they did not. Instead, they ran unshielded wires to homes and connected them to loudspeakers.

Rediffusion later applied similar principles to TV distribution. As I noted in my article “The World of CATV Engineering and the CATV Engineering of the World” in Videography in April 1978, Rediffusion’s TV subscribers didn’t receive retransmitted broadcast signals via coaxial cable; they received much-lower-frequency signals carried over wires. “Changing channels” was actually done by switching between signals on different wires.

Subscription redistribution by wire of wireless broadcasts was a service available in the U.S. no later than 1922. J. A. Gustafson, manager of the Fredonia [Kansas] Telephone Company, wrote in the December 16, 1922 issue of Telephony, “We have added a radio receiving set to our central office equipment and furnish radio service to our subscribers. This service is furnished over cable pairs that would otherwise be idle.

“To furnish this service we use a standard radio receiving set and three stages of amplification. A circuit is furnished to the subscriber at a monthly rental for the circuit only, and the subscriber buys his own loud-speaker or receivers.” Gustafson went on to describe various revenue models, including subscription, pay-per-listen, and coin-operated.

That was roughly 88 years ago, a nice ripe age, and also the standard number of keys on a piano keyboard. But more than a hundred years before that a keyboard instrument played a role in what would become pay cable.

British physicist Charles Wheatstone used to give “enchanted lyre” “telephone concerts.” The audience sat around a fake metallic lyre suspended from a wire, as shown above.

The wire went through the ceiling, where it connected to the frame of a keyboard instrument in an unseen room. A musician would play upstairs, and the sound would be conducted down the wire to the lyre downstairs.

Wheatstone called it an “acouryptophone.” A reporter for the journal Repository of Arts speculated in the September 1, 1821 edition that there might someday be more wires, extended farther, allowing people to listen to opera in their favorite tavern.

Opera alert: The word “opera” is going to appear frequently between here and the end of this post. It’s not because an opera (New York City Opera’s Le coq d’or) was carried exclusively on cable-TV channels (no broadcast) in 1971. It’s also not because today, in addition to being the 125th anniversary of pay cable, is also the start of the first anniversary of National Opera Week: http://www.operaamerica.org/content/advocacy/now.aspx

It’s because opera played a role in all of the following events. It was a very popular form of entertainment, the rock concerts and football games of the 19th century, and opera companies were institutions with the resources necessary to try technological marvels. You can read about opera’s role in the development of stereo sound and broadcasting in my post on the 100th anniversary of the first live opera broadcast here: http://schubincafe.com/blog/2010/01/100th-anniversary-today/

In the December 30, 1848 issue of Punch, there was an article about a proposed “opera telakouphanon.” The last word in the previous sentence was a term applied to a “speaking trumpet,” a form of hearing aid. The author speculated that some version might be used “to bring home the Opera to every lady’s drawing-room in London.” But a new element (besides substituting homes for taverns) was introduced to the 1821 idea: it was to go only “to the dwellings of all such as may be willing to pay for the accommodation.”

As the telephone was being developed, a writer for The New York Times speculated in 1876 that it would be used to deliver opera from the Academy of Music (the city’s main opera house at the time). The following year (1877), a cartoon in Punch’s Almanack for 1878 (below) showed how a home of the future would be able to select from different opera offerings.

In 1878 opera actually was carried electrically over wires in Bellinzona, Switzerland, and in 1881 it was carried in stereo from the Paris Opera to the Exhibition Hall of the Palace of Industry as part of the International Electrical Congress. Below is a diagram from a Scientific American report that year.

All of the above set the stage for the event depicted in the first drawing at the top of this post. Augusto Machado was a Portuguese opera composer, but Portugal was not the center of the opera world in the 1880s, so he opened his opera Lauriane in Marseilles in 1883. After its success, Machado was bringing it home to Lisbon on March 1, 1884.

It was a big deal: a local-boy-makes-good story.  O Diário de Notícias (The Daily News), alone, ran five articles about it between February 28 and March 3. The king was to attend. And that turned out to be a problem.

King Luis I’s sister, Maria Ana, Princess of Saxony, died on February 5.  Rules of royal mourning restricted the king to the palace.  He could not attend the Portuguese premiere of the opera.

Alan Danvers, engineer and manager of Lisbon’s Edison Gower-Bell Telephone Company, was aware of the previous opera transmissions and came up with the idea of putting microphones into the opera house and connecting them to the palace. The article in O Antonio Maria includes multiple illustrations of the king listening to the opera, such as the one below.

The king knighted Danvers for his services. More significant for us, the following year the theatrical concession company Matos & Valdez entered into an agreement with Danvers’s telephone company to provide a pay-cable opera service to subscribers.  For 180,000 reis (about $74 at the time or around $1750 today) for the season, they could listen to up to 90 opera performances.

The first was Mefistofele on October 29, 1885, 125 years ago today. It was the first subscription entertainment service delivered to homes, and it led to, among other things, radio, television, and the first newscasts, as shown below at the Telefon-Hirmondó in Budapest (see the 100th-anniversary post for details). Opera sound continued to be delivered by pay cable into the 1940s. 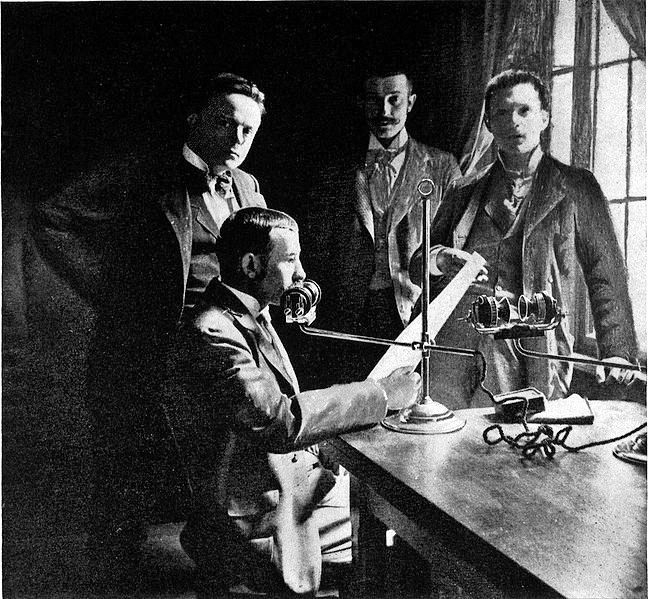 What about that drawing at the top of this post? Yes, the opera that was the subject of that article and drawing was transmitted in 1884, but it was a sound-only transmission. So why are there what appear to be TV monitors at the lower left and right?

There’s nothing in the article to explain them, and the artist is no longer alive, but details at the bottom, such as one just over the signature, might offer a hint. Microphones (called “telephone transmitters” or even just “telephones”) in 1884 were not necessarily shaped as they are today.

By the way, in addition to pay cable, another modern technology was being developed at that time. Ever since the publication of the photoconductive properties of selenium in 1873, there was a great deal of interest in the creation of what we now call television. Also in 1885, for example, Germany issued what was later called “the basic television patent.”

The first book on the subject was published in Portugal in 1878 by a physics professor who was later made Count of Campo Belo by the same King Luis I. This is the cover of an 1880 edition of the book, with text in English, French, and Portuguese.  You can read it here: http://histv2.free.fr/de_paiva/p0.htm

Campo Belo might ring a bell based on the 1958 play and 1960 movie Sunrise at Campobello, about Franklin Delano Roosevelt’s getting polio before he became President of the United States.  FDR was the first President to appear on all-electronic television (Herbert Hoover appeared on electromechanical television when he was Secretary of Commerce).  And Sunrise at Campobello was written and produced by Dore Schary, who later ran Theatre Vision, an early contemporary of HBO in the field of, yes, pay cable.